Religion is most promising nectar seeking to cure everything that is unpalatable in life. We regularly consume this potion, of course with faith. India is no different. Rather it has a variety of religious potions to embellish the personal religious tavern. I had written about one such new potion about Sai Baba.

Until about 30 years ago i.e. before separatist Khalistan movement started in Punjab, Sikh religion and rituals were part of religious rituals of every Punjabi Hindu. At ground level, barring Sikh bigots, situation is same. For all practical purposes there is hardly any distinction for the purpose of bonding though marriage or otherwise. Sri Sukhmani Saheb as this holy Sikh book is called, is part of the supreme Sikh holy book Sri Granth Sahib. The reading of Sri Sukhmani Sahib is supposed to bring peace. In fact ‘sukh’ means peace ‘mani’ relates to mind. I wonder if mere reading without applying its content to day to day life will bring peace. Any how a reading session is called ‘paath’ or पाठ़. This book deals all aspects of human actions and behaviour etc. which disturbs peace in humans. A trilingual version of Punjabi, Hindi and English can be downloaded from here. A very interesting compilation listing all human vices, tangible as well as ethereal. A youtube video reciting the holy hymns is here under:

The paath पाठ or Reading:

A few days ago my wife had a program or should I call a small congregation for such session of reading the holy book. She had invited about a dozen of her friends. The session was to start at 3.30 PM and it started at that time with two readers who had arrived at that time. As is always, I was busy in office doing not so consecrated work. At 4.00 I came to know of poor turnout by message from my son and I assured that by end of it i.e. the snacks time everybody will be there. A ritual remains that i.e. ritual. I predicted right. The attendance was full at the end and thank God there were not much leftovers. I hate eating left overs.

Since morning the preparations for the occasion were undergoing. It was low-key affair therefor only two things were cooked Choley छोले and Rice. Rest were outsourced from market. These included Kulcha (a kind of bread), biscuit or cookies, Salty snack, Samosa समोसा, goolab jamun गुलाब जामुन , cauliflower and spinach Pakora or गोभी और पालक पकौड़ा. Off course the tea and prasad called कड़ाह प्रसाद या आटे का हलुआ। for the uninitiated if some of the snacks were replaced with gravy vegetables or dishes and add one yogurt dish, this would have been good enough for an elaborate dinner. Everything went well and all left by 7.00 PM. I had slid quietly into my room at about 6.45 PM. The last pakora was consumed by me at 8.30. Slightly there after my wife rushed in, ordering my son to fetch more Pakora and samosa from market. I had to interfere over a futile exercise as It was dinner time and shops dispensing these snacks shut down at this late hour.

The friend had a fleeting visit. At 9.00 PM she dropped in and left. I did not ask for details but the purpose of tuch and go was no clear. Perhaps it was personal RSVP.

Pakora is undisputed King of Punjabi snacks. This is the picture of cauliflower pakora: 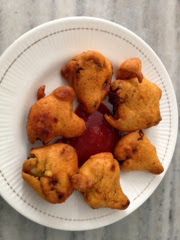 Should we call it Cauliflower Dumpling in English? I am not sure.

The above narration only shows the formality attached with all public or private congregations, religious or not. What purpose it served to the hostess and what purpose it served to guests? Psychological to hostess perhaps and social to both. That is my guess. Do not share this post with my wife. She doesn’t bother herself at all as she does not know that I blog.

The fact however remains that these religious potions serves only those who believe in them. Reading a holy book and learning to observe one self everyday is one thing but reading just for the sake of reading seems too far fetched for logic. There is however a reason that the Sikh holy book is written with rhyming precision and each chapter mentions as to in what musical composition it is to be sung but I do not thing that musical pleasure is the purpose. That is just an additional benefit.   A similar thing is happening with Hindu ‘Mantras’ in Sanskrit. West is rhyming or listening to it without understanding a word of it but they claim that it calms the mind. Of course it does. It is the music, stupid.