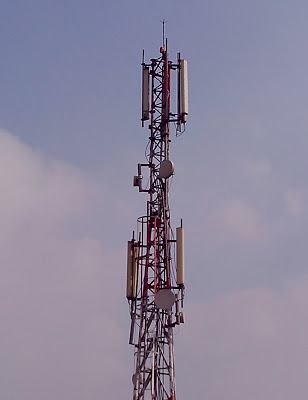 It had been a week of cellular discomfort. Too many mobile service providers and too little service. Vodafone continue to render lip service by telling me that my phone is not reachable. They want my alternate number. Shameless people did not pause to think that if my phone is not reachable, it could be their problem. Perhaps they know the technical problem and know that it can not be solved without making infra-structural changes.
Anyway my problem is two-fold. One that Data services drop and rather stop altogether at any time or any place. That appears to be part of spectrum problem which Vodafone is unable to solve on its own and has asked the Government of India to allot additional spectrum. Second problem is that in certain part of my office, even when phone shows 3/4th strength, incoming callers ger a message that the phone is ‘not reachable’
With the help of google, by sharing my location with its browser on Android phone, I could find out that I am connected with a tower wich is far away and not with the nearby tower. It also appears that nearby tower is down and non-functional. Here is the ‘jugaad‘ or work around fix, to boost signal as suggested by an old friend:

Take an electrical copper wire and tie its one end out side of building through some slit near the window or door or by drilling a hole. Just like any other cable lay it right upto the room where the signal is low and tie the other end there. Both ends of cable should be peeled for about six inches and spread like it is shown in the picture below:

The above solution worked for GSM network. I have doubts if it will work for CDMA. But I would like to know if this solution works at other places as well? and How it works?