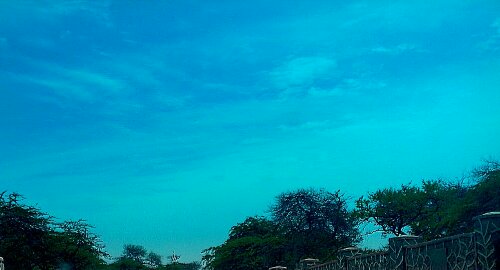 Warm weather is now hot during the day, successfully scaling above 100f. A rather unusually brief drizzle of rain brought some respite, yesterday night but day promises to return with same menace. Few tiny clouds in the sky are hardly enough for optimism. Like clouds words are few. Too few to write or to post in blog. That rain of words which used to drench is a distant memory.
END_OF_DOCUMENT_TOKEN_TO_BE_REPLACED

It is raining cats and dogs since yesterday night. Rain stops for a while but restarts again. The outpour becomes torrential and then it subsides to stop altogether. From where it starts all over again. By noon the rain stopped altogether. However the damage has been done. Whole day traffic was a mess. but now it is all quite.

END_OF_DOCUMENT_TOKEN_TO_BE_REPLACED

Winter which descended with a bang on Christmas 2012, seems to have stealth its way out with a spoof. For last five days, here in New Delhi, temperature is consistently rising. Today it is comparable to Sydney, Australia. It is said that temperature all over Asia is unusually high as part of environmental upheaval. First there was absence of dust storm in New Delhi, during summer. Then there was unusual heavy rain on Dashahra/Vijaydashmi Day. It never rains in Oct-Nov but this year it did. Now this warm Lohiri. Any way:

Whatever the temperature, the bonfire would be lit and enjoyed even if we have to pull out half sleeve shirts and knickers from the closet or to postpone it from early evening to early night.  Life goes on.

Unlike Android, BlackBerry has no native program for Weather Check. Jared and Company provides a free program called ‘WeatherTrax’ . However it has a problem giving weather. It appears that it gets confused between the minimum temperature and current temperature, some times. See the snapshots below: 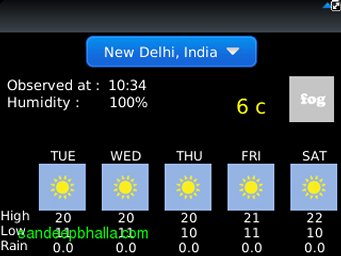 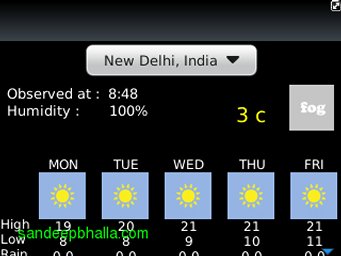 It may be noted that low temperature is higher than the current temperature on both occasions. In first snapshot low was 11 and current was 6. Similarly in the second, the low was 8 but current was 3 degrees Celsius. This is apparently some anomaly which needs to be fixed.

For the record, fog and cold weather has certainly hit hard, the life in New Delhi. While everything is normal the weather is not. Fog greets at all the places. Visibility is OK after sunrise rather at 8.00 AM onwards. This is a picture taken at about 10.45 AM: 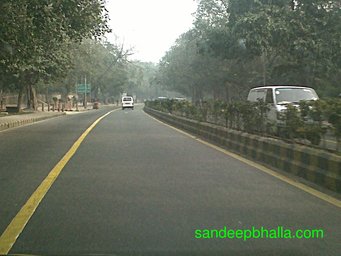 The sunlight could be seen today at 11.00 AM. This picture (like the above one) was shot from Blackberry 9220 just when sun rays hit the ground: 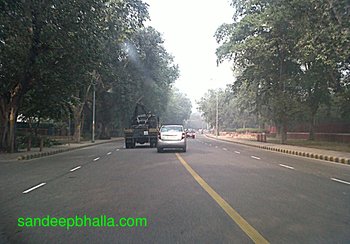 BTW traffic on this road is always thin. It is not because of fog. Elsewhere it is the usual chaos.

Winter has frozen my thoughts.

The bright sunshine, the first of 2013, after several days of fog, clouds and chilly winds has an elevating effect. Sitting in bright sun shine, turns every person to recluse. The body, after battering with cold for several days wants to relax and heal itself. Strangers sitting in lawn, hardly make any attempt to converse amongst each other. Each immersed in his own universe of thoughts, as if talking within. Many of them have seen more of the winters than others.
This reminds me of last weekend. An old friend and admittedly, more experienced, was narrating me several of his life experiences. Not that I wanted it, but talking made it possible for him to ignore his internal turmoil, the disappointments, the hurt and above all the loneliness. Delirious effect of drinks helped his cause further. To sum up he dropped these Chanakya like, pearls of wisdom:
“1. Be good from the out-side, if not from inside and keep the reality in mind;
2. Do not forget but know how to forgive;
3. Let there be enmity with someone but do not let him know;
4. Do justice or not, but make sure that it should appear that you are just.”

As is apparent, the old man had tried the above principles, all his life. It made him accumulate some wealth but it earned no solace or peace. Why? Because looking closely at each principle of the above Charter of Manipulation is sheer clever wording to be dishonest, brutal and cunning without any feeling of guilt. It is a blueprint for deception. After a life time of acting this deception, it becomes a reality. Mask becomes face. Several masks make one wonder about the real face. This oscillation, when causes depression take us to church, temple or some Guru to tell us that this world is an illusion and so are our problems. When it makes us elated, we go to pub and brag how wonderfully, we conquered, the world ruthlessly. Battering with these two ends, the mind becomes shallow and devolved.
Surprising fact is that every person knows the above principles and is following this Charter, believing that it is a secret knowledge, personal only to that person.
I wanted to convey this, but it was useless. Talking is rarely conversing. We only talk. We don’t listen. Even when we do pretend to listen, a little google inside our minds, merely scans the words and make us speak with a few words in response, without understanding the context; mental or environmental.
Most of the time, communication remains illusive and at best, just one-sided.