Living in Delhi is living in insecurity.

Does Police ever learn from their past mistakes?

Delhi and Mumbai are two cities of India which have faced maximum wrath of terrorism. Innocent people and young children have died in markets from the bombs but brave terrorism risk every day. But it seems that police never learns from its past mistake. Laziness or ignorance of police personnel at street level may become major security threat any time. But to under stand the implication of a small mistake (which I will point out later), let us briefly review the last terror attack in Delhi on Parliament of India.

Revisiting the attack on Parliament on 13th December 2001.

Terrorist riding in a car which looked like an official car of an MP, passed the first corridor of security. It was at second layer of security that they were suspected and thereafter the terrorist inside the car opened fire and killed police personnel on duty. After a prolonged shoot out the terrorists were gunned down but by then they had killed 6 security personnel besides 8 others. In 2014 the entire Parliament paid homage to these security personal who sacrificed their life on the line of duty in a rather elaborate public function which was televised live. 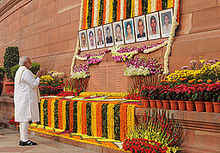 Prime Minister paying homage to martyrs of 2001 attack on Parliament of India.

Now if we notice the most important component in attack is the car. One can not walk down the street with AK-47. It can only be concealed in a Car. What is better is a car which looks like official. Now look at the picture below: 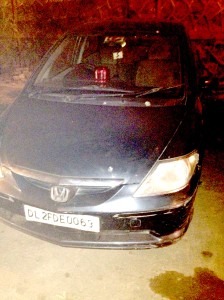 Z Class or Maximum Security and a rogue car with red beacon: