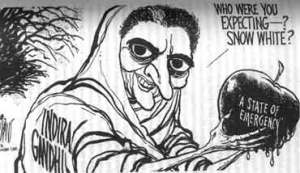 Those born after 1980 must read this:

Emergency is a dirty word in India. Constitution had vested certain powers in the Government to be invoked in case of emergency. Indira Gandhi, the then Prime Minister invoked these powers on midnight of 25/26 June 1975 on the ground of ‘internal disturbance’ which ground has subsequently been deleted by Constitutional Amendment. The effect of Emergency Proclamation was that civil rights were suspended. Habeas Corpus was not available. Legal deliberations on abolition of due process is in a previous article here.
Mass arrest of dissenters and protestors was the first implication of emergency. Harassment and arrest of inconvenient politicians and lawyers was second. Mass vasectomy was next. Abuse of powers to arrest to settle personal scores by Congress party and Communist Party members was next. Soon Bureaucracy joined the party to settle scores or to make money.
Those with spine were either in jail or underground.

For one thing, the trains were running on time. Absenteeism in Government offices was replaced with punctuality. I am not able to recall any other plus point. May be I was too young. But I noticed many things. END_OF_DOCUMENT_TOKEN_TO_BE_REPLACED