Bhartiya Janata Party was founded in April 1980, after collapse of Janata Party, which was an all party front created by all parties to fight Indira Congress in 1977.

The first election it fought was in 1984 and it won just two members of parliament.

From just two seats in Lok Sabha in 1984 to winning two back-to-back majority in general elections, the BJP now firmly occupies the position of dominance that the Congress once held. The 300+ seats BJP has won in 2019 is the saffron party’s highest ever Lok Sabha tally. It had won 282 seats in 2014. The saffron map of BJP in 2019: 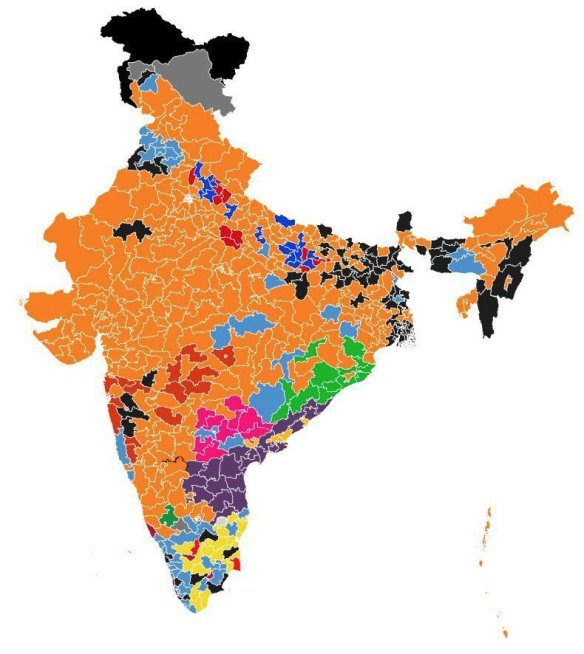 END_OF_DOCUMENT_TOKEN_TO_BE_REPLACED

Uttar Pradesh or U.P. in short, which literally means ‘Northern Province’, has finally got a new BJP Government with Yogi Adityanath as its Chief Minister. BJP won and all the rest lost including media which had  predicted BJP a distant third. But the results raise a few unanswered questions.

END_OF_DOCUMENT_TOKEN_TO_BE_REPLACED

Election results in 4 out of 5 states which would comprise about 1/3rd of India brought out one winner: The ruling party in the Federal Govt. i.e. BJP and unequivocally declared Prime Minister as the foremost Pan India Leader. Nothing could be more sweet for BJP on Holi.

Saffron is the colour of the flag of BJP. It is rightly calling this Holi as Kesaria (i.e. saffronic) Holi. It has earned it.

Is merely the ruling combine in these states, the only loser?

In my humble opinion, the biggest loser is the credibility of the media (a.k.a. Journalism). The media was no where near the ground at all. It was so busy projecting the strength of party which hired it that it completely forgot that it has any duty to report the truth. The subtleness of bias was completely missing. It was open display of solidarity with chosen party. Unfortunately for the media people saw it and cared the least. The credibility of media was already lost perhaps. END_OF_DOCUMENT_TOKEN_TO_BE_REPLACED

Rout of opposition in Delhi Elections:

As per expectations, Arvind Kejriwal’s Aam Aadmi Party won the Delhi elections and routed all other parties. The latter was a shock. Out of 70 total assembly seats AAP has won 67 seats remaining three being BJP 2 and SAD 1 seat. The projected Chief Ministerial candidate of BJP also lost. Everything went wrong for congress which lost it’s all seats. What made this happen? Right answer is almost obvious but is missed by politicians. END_OF_DOCUMENT_TOKEN_TO_BE_REPLACED

Election 2014 has many unique features.

Elections in India returned Narendra Modi as it’s 14th Prime Minister. Election 2014 largest adult franchise in the world. 814 Million people participated out of 1.2 billion Indian citizens. Apart from largest electoral process ever, This election had many notabilities such as:

1. Looser and winners were known from the beginning. Result only brought out the Modi wave into open. A first clear majority of a party in last 30 years. See the result depicting the tsunami called Narendra Modi, in election 2014. (See the picture frame above with credit to NDTV).

2. A person who started his career as a tea vendor and a foot soldier in his party became Prime Minister of the country, by choice of people not by manipulation or chance. END_OF_DOCUMENT_TOKEN_TO_BE_REPLACED