Main Stream Media is now a propaganda machine for hire. Independence of journalism is a concept which is out of practice. It seems this is true not only for India but also in USA. One newspaper twisting same news headlines in two different ways! See the picture of Wall Street Journal below:

Editors who used to be humble beings now live in sprawling Mansions, travel in executive class and stay and dine in five star hotels. TV anchor driving Porsche is a new norm. Do news papers sell more now? How these journalists are making money?

Yesterday I read an article about economy which does not have a single numeric character. It suggested as if India has curfew like situation. But actually it is not. It is a business as usual for small transactions. Indian business is run on credit though settled in cash. Now people are making habit of carrying plastic or mobile wallet. See the market yesterday: 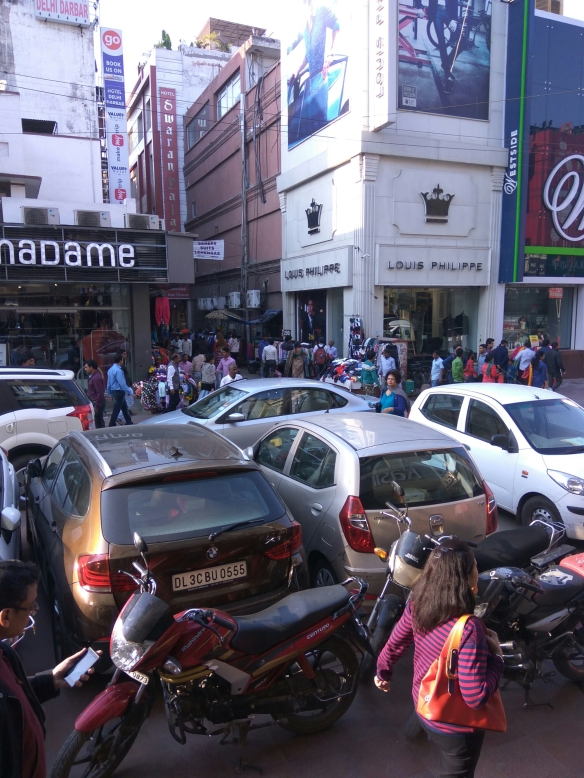 Picture tells half of story. Street vendors are not complaining but the big show rooms are empty. Sales fallen by 60%.

Legality of the move:

Those attacking the move to demonetization large Denomination Notes on the ground that Govt can’t do it without a law have no inkling of the Constitution. Issue and withdrawal of currency note is prerogative of Reserve Bank. But temporary embargo on withdrawal of cash is exercise of Executive Power by the Government. Article 73 is fountainhead of executive power of the Government. Article 73 gives the executive branch all the powers on which legislative branch can enact law as.

Journalists and politicians complaining about trouble to businessmen or to poor seems to have never glimpsed the real business world. Any inconvenience would be a blip on larger time line. middle class is developing the habit of using plastic money. Poor were cashless any way. They earned to consume and are doing the same.

Ordinary people help each other and are helping. Those who live in isolation and are socially bankrupt, can’t be saved.

Foolish people who out of panic standing in que everyday to deposit and those who are hired to exchange money are creating chaos. Who can go hungry on ₹2000 a day withdrawal or ₹24000 a week except those who got used to spend ₹50000 every night in drinks and dinner.Proper thing to do is not to panic people but that is exactly what MSM is doing.

Of course this should be a step in larger direction to go cashless. Cash withdrawal limits must be kept at all times.

Working class people are net gainer. Most will get one month’s advance wages. Unemployed stood in que to exchange money and earned more than an unskilled worker would earn in a day.

There is a rush to make payments. Govt dues were overpaid. Local Authority which were accepting old notes received payment of dues which were yet not due.

Of course there would be curtailment of business activity where requirement of cash is more than 50000 a week but business does not generate cash. The limit of withdrawal in current account is 50000 and that in savings account is 24000 a week.

Pay your tax and spend.

It is a good concept to say that pay your Tex before you earn your right to spend. But in reality tax rate must not be confiscatory. 30% income tax and +30% on expenditure is barely non confiscatory. Inflation is another ghost tax without name or law. Of course the income tax must be linked to inflation apart from simplified procedure to file return. But that presently seems to be nobody’s concern. That is the area of concern and not the move to demonetise the large notes. It may be an inconvenience for few days. But expect the banks to function normally from next week and things back to original self from January. Soon there should be announcement on keeping large amounts of cash in new currency as well. Lets wait and watch.