Even Odd Logic of Arvind Kejriwal. 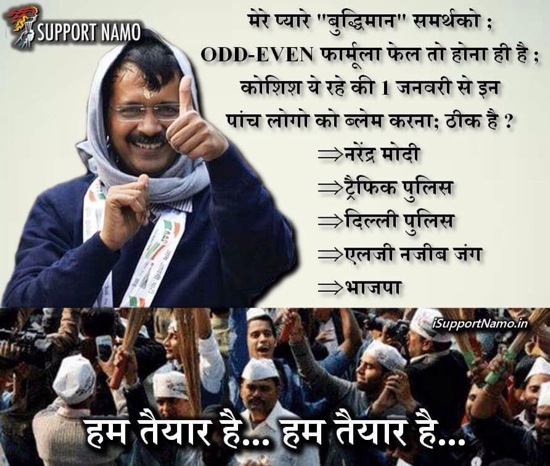 Arvind Kejriwal is now Chief Minister of Delhi but he likes to behave like an emperor. His announcement that from January Even Odd numbering vehicles shall be alternatively ply on Delhi Roads is a reflection of this dictatorial mindset. Merely because Chief Justice of India agreed to comply does not make the order legal. The fact is that this Even Odd logic is not only illogical but is legally and morally incorrect if not draconian.

Freedom of locomotion is a  fundamental right. Freedom to drive own vehicle is obviously included in freedom of locomotion. Can a Chief Minister by executive fiat order a class of vehicle not to ply on Roads? I do not think so. More so the Delhi Legislature is a subordinate legislature and Delhi Government is not an Executive under the Constitution but are governed by Government of National Capital Territory Act. Does that act authorise Delhi Government much less Chief Minister to prohibit plying of certain vehicles only on the basis of Even Odd logic? I doubt that.

Chief Minister in Parliamentary System of Government is not a monarch. Chief Minister announced this even odd logic ex tempore i.e. all of a sudden without any consultation with people or his party members or his legislature. Such measure could be introduced by way of a law duly passed in legislature but the problem is: Is motor Vehicle and traffic comes with in the purview of Delhi Government?

As stated above Arvind Kejriwal is an authoritarian who is barely able to bear the facade of democracy. Look at the manner of expulsions of Prashant Bhushan and Yogendra Yadav, from his party or opposition MLA’s from legislative assembly. Surrounded by sycophants, he can not bear any dissenting voice. China is a perfect model of governance for Kejriwal. It is no democracy. People have no right to elect a Government. While I am punching these words China has again enforced Even Odd Logic after it issued a red alert for the first time in Beijing today. But note even Beijing is using Even Odd Logic as a last and temporary measure not as a routine as Kejriwal wants it to be from April. Problem is Kejriwal has no experience of running any government or any office. He only knows the language of prohibition. Even otherwise no one feels comfortable to give advice to a dictator.

Fundamental rights inherent in an individual are supreme and can not be curtailed on the basis of personal opinion of an individual. Any law abridging fundamental right like right of locomotion has to stand test of reasonableness. Every legislation or executive regulation has to under go test of reasonableness.
In case of prohibition like Even Odd Logic, the test has an additional component:

Is prohibition is really the only way to achieve result?

Unfortunately in this case, State Government has not even tried anything at all but has come up with prohibition on certain vehicles each day on an arbitrary choice of Even Odd. There are better and easier alternatives available besides the fact that Government itself is responsible for the mess.

Rumour has it that Kejriwal has stolen or discovered the book of Indira Gandhi, which contained the formula of governance. But that is a jest. Truth is Kejriwal is using ‘Even Odd Formula’ to feed his constituency of Rickshaw pullers/drivers. They voted en mass for Kejriwal. With private vehicles out-of-the-way, they will have a field day.

Since Kerjiwal is merely concerned with power, he will not do anything positive or creative. Examples:

1. Removal of massive encroachment from pavements.

2. Cycle stands with cycle for hire?

5. Encourage car pooling with verification of people’s identity and launching an app for this purpose.

And to think and find more of such similar suggestion.