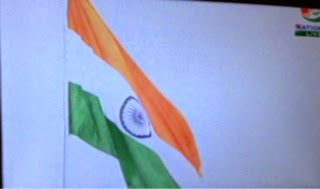 Today is 66th republic day in India. On this day in 1950, the country had adopted it’s written constitution severing all ties with British Empire in respect of governance of India and thereafter the head of state came to be a citizen elected by elected legislatures.

As I am punching these words into my iPhone, I am watching the republic day celebrations on TV. Something I had not done in past 10 years. It is very hard to subscribe to patriotism when the Government is busy in filling the coffers of of few influential persons while rest of country is reeling under unprecedented inflation especially food inflation. Any one may look up for these financial scandals by searching ‘2g’ ‘cwg’ ‘coalgate’ and ‘madamji’.

Citizens used as consumers to be used as fodder to feed the comfort of few.

The big question this republic day is will things change for this country?

President of USA Barak Obama is the official guest of honour at this Republic Day celebration.
While drizzle continue to pour and secret service officials with president Obama continue to search for something suspicious, show commenced.  I wonder if President of USA ever ponder about the policy pursued by his country for past 60 years towards India and rest of world, ignoring democracies and supporting dictators? It is doubtful if this visit means any tectonic shift in the policy of USA.

The rain and chill is irrelevant or the determined participants in the parade made it so. The republic day parade with display of military capability is more reminiscent of similar parade in Russia. I do not think USA has any similar tradition. While Brahmose missile system crossed, president Obama appeared to be looking around with glum face. Once marching women soldiers passed, he was again usual self enjoying the beats of music with nodding head.  Opposition party’s crown prince Rahul Gandhi is missing from his chair but his mother is enjoying the parade.

I will give benefit of doubt to USA President that this is not mere symbolism. But I will remain skeptical. Bosses in ivory towers have to see through others eyes and hear through others ears. 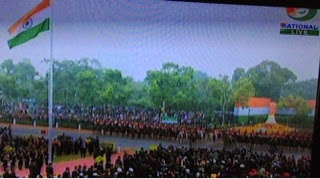 The President made an impressive speech in his so called contact with people. The speech had an emotional appeal for empathy. It also reflected that he had good knowledge of contemporary India.