A year back, Delhi University had started B.Tech and BMS Courses as Four Year Undergraduate Program. Now after the program had run one year, if was forced to scrap it. As a compromise the existing students will go on to complete the four-year course and would get their degree. The larger question is what shall be worth of such degree? Presumably nothing. 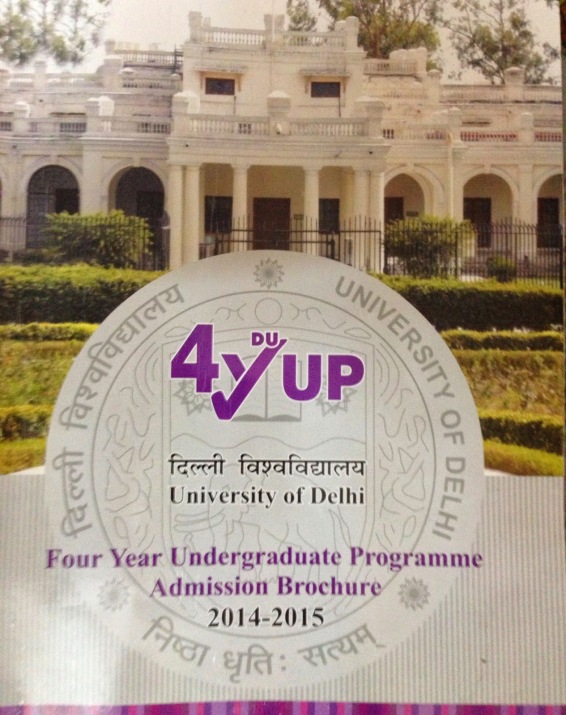 Dictate of UGC under the watch of Government.

Delhi University had started B.Tech and BMS Courses as Four Year Undergraduate Program last year and this year i.e. 2014, it had planned to increase the duration of all its undergraduate courses to four years. The move to scrap all the courses came under the dictate of University Grant Commission which claimed that four-year undergraduate program (FYUP) was in conflict with the National Policy of Education. This policy was first framed in 1968. It was changed and reframed in 1986 and was last amended in 1992. The link provided above is last version of the said policy published in 1998 and is official version of Government. It appears UGC is reading something in Policy which is not there. Let us read what these policies laid down.

1968 education policy was a small document. Clause 17 is relevant and as under:

17. Educational Structure: It will be advantageous to have a broadly uniform educational structure in all parts of the country. The ultimate objective should be to adopt the 10+2+3 pattern, the higher secondary stage of two years being located in schools, or both according to local conditions.

What it means? According to above clause that the facility to provide a 10+2+3 must exist in all local conditions. Can it be read to mean that in all circumstances there must only be a 10+2+3 standard? I am unable to do that. Let’s see the 1986 policy as amended in 1992 as well.

There is only two references to 10+2+3 in the latest policy. These are extracted as under:

1.6 Perhaps the most notable development has been the acceptance of a common structure of education throughout the Country and the introduction of the 10+2+3 system in most States. ……….
3.3 The National System of Education envisages a common education structure. The 10+2+3 structure has been accepted in all parts of Country. Regarding ………’

Does these words seem like an injunction that Universities must stay at 10+2+3 only?

I am at loss to read it that way. I would like to know how that inference can be drawn from above two sentences which only refer to accomplishment and nothing more.  Let us read few more extracts.

5.23 It is proposed that vocational courses cover 10 per cent of higher secondary students by 1995 and 25 per cent by 2000. Steps will be taken to see that a substantial majority of the products of vocational courses are employed or become self-employed. Review of the courses offered would be regularly undertaken. Government will also review it’s recruitment policy to encourage diversification at the secondary level.

5.26 There are around 150 universities and about 5000 collages in India today. In view of the need to effect an all round improvement in the institutions, it is proposed that, in the near future, the main emphasis will be on the consolidation of, and expansion in, the existing institution.

5.28 …………………….Creation of autonomous departments within Universities on a selective basis will be encouraged. Autonomy and freedom will be accompanied by accountability.

5.39 The proposal [of de-linking degrees from jobs] can not be applied to occupation specific courses like Engineering, Medicine, Law, Teaching etc. ………..

Is starting a new FYUP course is in conflict with above objectives of 1992 policy?

Please. I beg you give me some modicum of  reason. How?

Other FYUP in India.

The last but not the least shameful fact is that several universities are already running FYUP in the country for years. Bangalore and Allahabad Universities are two examples, I know of. Media reports are citing several others as well. Why DU has been single

At best all that can be said about education policy of India about FYUP is that it favoured 3 years program in 1968 as an objective. In 1986 and 1992, Education Policy expressed satisfaction over achieving this objective.

Did it say that Universities can not move forward?

Did it say that a University can not start technical courses like B.Tech or BMS?

No. On the contrary emphasis is on opening new courses by existing universities.

No. It treats them differently in clause 5.29 extracted above.

At best what the UGC could do was to emphasis continuance with three-year course as well for those who want it but it had no business with FYUP or four-year courses. But why it took one year? Why Read the Education policy of 1992 in the year 2014 as last word?

Who did it and why:

Decision to scrap the FYUP:

What message does it send?  Everybody knows that so-called autonomy of University is a farce. If appointments of VC and management council members are made by Government, there is no use calling it autonomous. It is a fact that DU is an institution run under the Government, albeit a bit indirectly. If a govt. controlled institution like Delhi University was wrong to offer FYUP, especially the now scrapped professional 4 year B. Tech and BMS course and UGC and the Government were found napping, what it impresses upon students? Can they and should they trust any institution?

Alma Matar is no Kind mother but a beast who sucked several years from their destiny.

Then we blame the young for being unscrupulous and selfish. We taught them to be so. In whole episode nobody thought about the students. Where is propriety in decision-making?

In every official appointment or action there is a ‘de facto’ doctrine to protect public from illegalities of government actions. The rights created even under illegal in-house management are valid for third parties. Similar is the company law.

Is a so-called autonomous University worse than that?