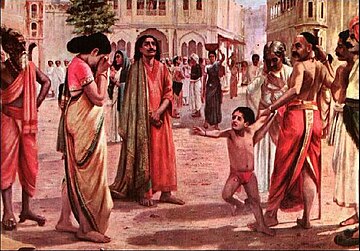 This was era of truth. A commitment was to be honored with life. One could forego life but not commitment. The hero of this mythological era was King Harish Chandra. He once offered to give a hermit, whatever that hermit wanted. The hermit in turn asked his kingdom. Bound by his word of commitment, the King abandoned his Kingdom alongwith his wife and minor son. As common men they suffered all kinds of atrocities including slavery. The worst happens when Harish Chandra was employed as care taker of cremation ground where it was his duty to collect specified tax for cremation of dead body. His own son died of snake bite and his wife brings the son’s dead body for cremation but Harish Chandra could not relent. At this, his wife tore apart half of her Saree (wearing apparel) to pay the tax. Now mythology has a happy ending here. That upon this sacrifice, the Gods appeared and restored the son and Kingdom back to Harish Chandra, but that is a different matter. The point is that in this era there was no controversy as to what truth is and duty to follow truth was supreme.

Literal meaning of Treta is third. The mythology has it that treta yug was supposed to be third but Treta prayed that it may be the second and the God granted the wish. Hence the second era was Tretayug. In this era the Hero was another direct descendant of King Harish Chander of Satyug. The name was Ram or Rama. He is said of be the incarnation of God and is worshiped by Hindus. The tale of his life is Ramayana which is a holy epic revered by every Hindu. There are many versions of Ramayana, written by various authors but core of story remains same. It is must read epic for every human being.
Rama was a crown prince. His father King Dasratha had four wives. Rama was born from first wife. One day before Rama was to be coronated as King, his step mother and the third wife of his father, Kaikeyi reminded the King about the commitment he had made to her during war, when she had saved his life. In terms of commitment she wanted her son Bharat to be the King and that Rama be exiled to forests for 14 years. The King obliged but his heart was broken and he died. Rama as a duty bound prince and son went to forest. He was accompanied by his wife who insisted that it was her duty to remain with her husband, in riches as well as rags. His younger brother Lakshaman also insisted that it was his duty to follow the elder brother as he had been doing since childhood. So it was all about duty. It is very tragic story. It is often narrated in temples and those who recite and listen to it from heart, cry.
After Rama went to forest, the brother Bharat, who was out of station, comes back and rushes to forest, to bring elder brother back. But Rama refuses, again citing his duty to honor last wishes of King and father. Bharat cites his duty that during life time of an elder brother he could not be the King. (That is the principle of primogeniture) Bharat, returns to Kingdom and rules it as representative of Rama. He places the sandals of Rama on the throne and placed himself at the foot of throne. It is a long epic, suffice to say that emphasis had been on duty. The duty in this era was unambiguous. Truth was seen from the prism of duty.

The third yug is Dwapar which literally means Second. This is the yug of Dharma which means action which is just and proper. Mahabharata is the epic of this era but unlike Ramayana, it is neither treated as holy nor pious. Mahabharata is treated to be a bad omen and therefore it is never kept in household. In temples, library or schools, may be but never at home. However there is a small part of Mahabharata called Bhagvad-Gita which is revered as a holy scripture and is part of every Hindu household. Gita is also known for the word ‘Karma’ and various ambiguous meanings attached by people to it.
Mahabharata is a story of falling standards in public life. Rampant polyandry and polygamy.  Queens stooping below morality to conceive. King and prince’s lure to power. Deceit and manipulation to remain in power. Misplaced loyalties to King over the State. War and nukes. It has all the ingredients of any modern family story. The Mahabhartha in short is a fight between two set of cousins over kingdom.
Arjuna, in the battlefield, seeing all the blood relatives standing opposite him, baffled and wanted to retreat. Here ‘Krishna’ the incarnation of God in this era delivers the message called ‘Gita’ in which Arjuna’s questions are answered. In substance as per the Gita, inaction is supreme action but if action is required by the nature of dharam (duty) cast upon a human he must not desist from action. Arjuna was reminded that as a warrior it was his duty to fight. Arjuna was also disillusioned from his attachments towards his relatives. In short this era was about, action when called upon and inaction in other circumstances. To put it differently, action was to be taken seriously and not as activity.

According to some calculations Kalyug started around 3041 BC when Dwaparyug came to an end after massive destruction in war called Mahabharata. There are many interpretation of word ‘Kal’. It means machinery and it also means ‘tomorrow’. Kaliyug is also the name which is based on the premise that in this era the control of world vest in Demon ‘Kali’ hence the name. The ‘Kali’ here has no connection with the deity of same name.
Kal means tomorrow and in my view, that is what this era is all about. Truth has become relative. Duty is relative. Action or Karmas have become ambiguous. The mind is always in a state of conflict between truth, duty and action. Distinction between action and activity is blurred. But we all live and act for tomorrow. Nobody is concerned for today. Let us postpone it to tomorrow. Nobody is living for today. We are all aspiring for a tomorrow. Hopefully a better tomorrow. Today is missing somewhere in tomorrow. Hence the Kalyug.